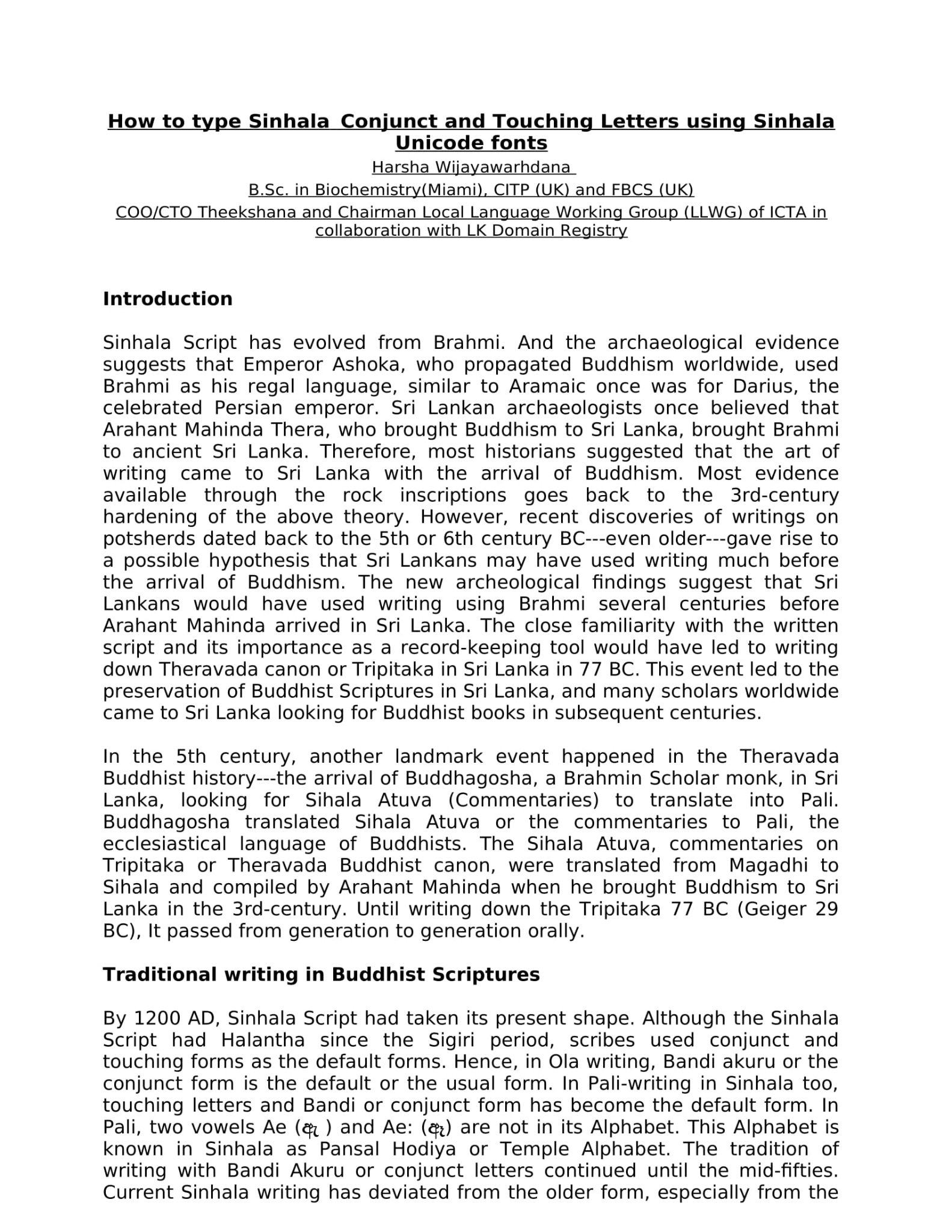 Sinhala Script has evolved from Brahmi. And the archaeological evidence suggests that Emperor Ashoka, who propagated Buddhism worldwide, used Brahmi as his regal language, similar to Aramaic once was for Darius, the celebrated Persian emperor. Sri Lankan archaeologists once believed that Arahant Mahinda Thera, who brought Buddhism to Sri Lanka, brought Brahmi to ancient Sri Lanka. Therefore, most historians suggested that the art of writing came to Sri Lanka with the arrival of Buddhism. Most evidence available through the rock inscriptions goes back to the 3rd-century hardening of the above theory. However, recent discoveries of writings on potsherds dated back to the 5th or 6th century BC—even older—gave rise to a possible hypothesis that Sri Lankans may have used writing much before the arrival of Buddhism. The new archeological findings suggest that Sri Lankans would have used writing using Brahmi several centuries before Arahant Mahinda arrived in Sri Lanka. The close familiarity with the written script and its importance as a record-keeping tool would have led to writing down Theravada canon or Tripitaka in Sri Lanka in 77 BC. This event led to the preservation of Buddhist Scriptures in Sri Lanka, and many scholars worldwide came to Sri Lanka looking for Buddhist books in subsequent centuries.

In the 5th century, another landmark event happened in the Theravada Buddhist history—the arrival of Buddhagosha, a Brahmin Scholar monk, in Sri Lanka, looking for Sihala Atuva (Commentaries) to translate into Pali. Buddhagosha translated Sihala Atuva or the commentaries to Pali, the ecclesiastical language of Buddhists. The Sihala Atuva, commentaries on Tripitaka or Theravada Buddhist canon, were translated from Magadhi to Sihala and compiled by Arahant Mahinda when he brought Buddhism to Sri Lanka in the 3rd-century. Until writing down the Tripitaka 77 BC (Geiger 29 BC), It passed from generation to generation orally.

By 1200 AD, Sinhala Script had taken its present shape. Although the Sinhala Script had Halantha since the Sigiri period, scribes used conjunct and touching forms as the default forms. Hence, in Ola writing, Bandi akuru or the conjunct form is the default or the usual form. In Pali-writing in Sinhala too, touching letters and Bandi or conjunct form has become the default form. In Pali, two vowels Ae (ඇ ) and Ae: (ඈ) are not in its Alphabet. This Alphabet is known in Sinhala as Pansal Hodiya or Temple Alphabet. The tradition of writing with Bandi Akuru or conjunct letters continued until the mid-fifties. Current Sinhala writing has deviated from the older form, especially from the use of Bandi Akuru or conjunct form. In the current form, Halantha or Hal-kirima is usually used in modern Sinhala writing. However, in Pali-writing, writers follow the older tradition, using conjunct and touching letters.

Basic Sinhala writing, Halantha or Hal Kirima became the default or the usual form deviating from the conjunct form. Writing the same word in several ways, became a complex problem when developing Unicode Fonts to solve. In the Local Language Working Group (LLWG), all members advocated creating fonts that supported Pali using touching and conjunct forms. In these deliberations, Reverend Meththa Vihari, a monk who is a specialist in computer font making and an LLWG member, compelled the group to consider developing fonts that supported Pali-writing. Therefore, the LLWG group suggested fonts that support basic Sinhala writing with Rakar and Yansa forms as level I fonts, and Level II contains the basic conjunct forms. The LLWG went further to define Level III fonts with touching letters, which are commonly used for Pali writing.

2)   Conjunct Letters Which Are Not Commonly Used

Table 2.  Conjunct letters which are not commonly used

Unicode fonts like Iskoola  Pota,  Nirmala  UI,  UN-Abhaya,  DinaminaUniWeb  can be  used  to  type  most  of  the  above  mentioned  conjunct  letters.  But not for all of them.